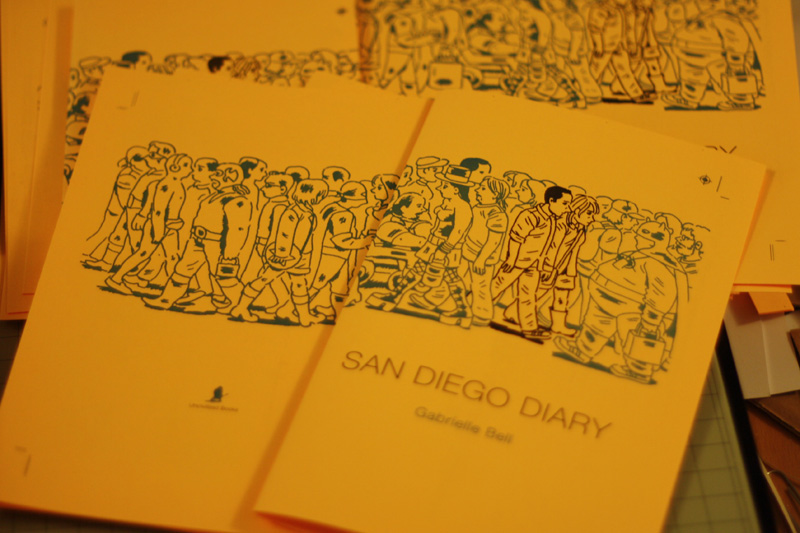 This is the third post in a continuing series. Check out parts 1 & 2.

The publication of L.A. Diary (in 2009) by Gabrielle Bell opened the door to other mini comics. Over the next 2 years we added new artists to the roster: Jon Lewis, Dan Wieken, and James Romberger. We continued to put out more comics by Gabrielle Bell and my own Cartoon Dialectics. This is also the period when I developed the “Structures” series, but I will leave that for a separate post.

Almost right away after the publication of L.A. Diary, we started to work on another issue. That became simply Diary: Minneapolis, California, New York, What the, Manifestation. As with L.A. Diary, we included a few pages of Gabrielle’s process pages, and I made an introduction (which you can read here). This time I made it into a comic. Check it out here. The comics from these two minis ended up being the basis for our first graphic novel: The Voyeurs.

The next artist to join the roster was Jon Lewis. Jon was another member of AWP and I was a huge fan on his True Swamp comics in the 90’s. When we talked about serializing new True Swamp stories in a mini comic, I jumped at the opportunity. He’s one of the great world builders in comics. The world of True Swamp is unique and unusual. The inhabitants of the swamp (from frogs, to various birds, to sentient slime molds) exhibit a human-like existentialist traits, but refracted through their specific animal characteristics and abilities. I’m surprised an Object Oriented Philosopher has not stumbled on Jon’s work.

He explores what it’s like to be a “thing”, something non-human, and it is entirely fascinating and engrossing. Think of moments when you’re lost in thought… in nature… deep in a forest… the buzz of insects, the song of birds… and sounds that are difficult to identify… you’re lost in reverie… gone from the world of humans… immersed of the non-human world around you… in communion with the hidden real of things… this is what True Swamp is like. Start with Book 1, follow-up with Book 2, then read the mini comics.

Another early mini-comic with Jon Lewis was Klagen: A Horror. It was an utterly bleak horror comic with Lovecraftian undercurrents. I printed the cover using Print Gocco gold ink. The guts were printed on bright, almost neon-yellow paper that was almost entirely overprinted with a dirty grey pencil texture. Only the word balloons exposed the full brightness of the yellow, giving everything an unearthly and menacing sheen.

Speaking of Print Gocco, it was a Japanese desktop silk screening system that was fairly popular in the mini comics world in the late 90’s early 00’s. We used it for a lot of our early projects. The system was discontinued and supplies are hard to come by. I still have a few Gocco bulbs, screens, and ink for a special project… that has not yet materialized.

Another artist that we published during that period was Dan Wieken. I’d reconnected with Dan after I returned to Minneapolis. We went to high school together where he introduced me to a lot of indie and underground comics. While I was in New York, he developed into a respected artist and musician. We put out a few art zines via Uncivilized: The Booke of Logos, The Petrified Catalogue, and Gagged.

Last, but not least, I continued to publish my own work via Uncivilized. I kept all the Trans… minis in print, along with Cartoon Dialectics, Vague Cities, and a few small side project like Ancient Reading Device, and “Structures”… which I’ll save for another post.

The final mini comic from this phase of Uncivilized Books was July Diary by Gabrielle Bell. It was our most ambitious and best printed booklet. About 40 pages, square-bound, 2-color cover. The amazing Minneapolis based printer, Shapco did beautifully job. The comic debuted at the very first ever CAKE in Chicago. It may have been the final mini during this period, but we continue to publish mini comics to this day under the Uncivilized LAB brand. More on this in a future installment.

The last page in July Diary had an ad for The Voyeurs, which would begin a whole new chapter for Uncivilized Books.