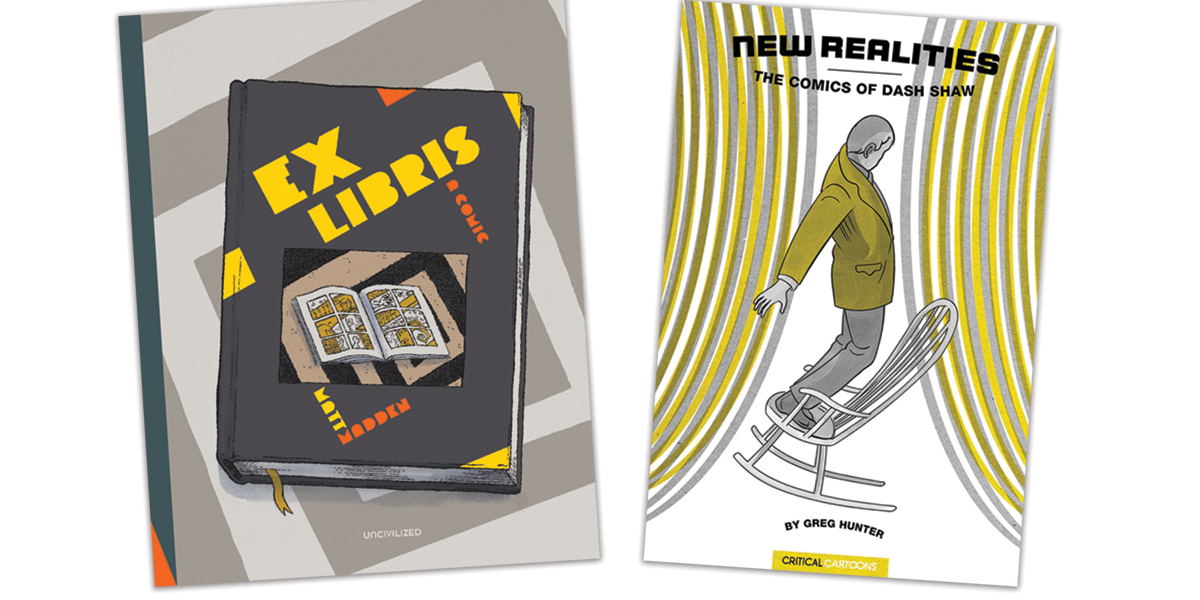 We’re excited to announce two Fall 2021 titles. First up is a metafictional graphic novel: Ex Libris, A Comic by Matt Madden. And second is a new volume in our Eisner Award-winning Critical Cartoons series of books on comics: New Realities: The Comics of Dash Shaw written by Greg Hunter. Both books are now available for preorder on our site, as well as across the web. Take a closer look:

“This elegant showcase of graphic storytelling displays deep knowledge of the language of comics. The book’s metafictional forays always serve the unnamed reader’s tale, too; the subtle build of the mood and suspense around them results in a dazzling graphic novel.”—Foreword Review

Ex Libris revolves around a character trapped in a room with nothing but a futon and a bookcase full of comics. As they peruse covers, read stories, and fragments of stories, they begin to suspect that the comics contain hidden messages and… a threat. Fiction and reality blur; sanity and madness become increasingly intertwined as the reader becomes convinced the key to their predicament hides between the panels of the strange books.

With a dizzying array of inventive visual and narrative styles, Ex Libris continues the line of exploration and play that Madden initiated with 99 Ways to Tell a Story: Exercises in Style. Ex Libris is a tribute to the meta-fictional tradition of writers like Jorge Luis Borges, Julio Cortázar, Vladimir Nabokov, and Italo Calvino (whose novel, If on a Winter’s Night a Traveler, was the inspiration).

MATT MADDEN (NYC 1968) is a cartoonist, teacher, and translator. His best-known book is 99 Ways to Tell a Story: Exercises in Style, a comics adaptation of Raymond Queneau’s Exercises in Style. His recent work includes the comic books Drawn Onward and Bridge. He has been living in Philadelphia since 2016.

New Realities: The Comics of Dash Shaw by Greg Hunter

Dash Shaw is one of the most restless cartoonists of recent decades. Since his breakthrough graphic novel Bottomless Belly Button, Shaw has constantly evolved his approach to the comics page. His acclaimed, idiosyncratic comics shift from domestic realism to sci-fi farce to historical fiction and formally innovative line and color.

But many themes in Shaw’s work remain constant. His characters live within their realities, often failing to connect or communicate. Comics as different as the dystopian spectacle Body World and the geek-culture comedy Cosplayers become sites of clashes between incompatible mindsets—with Shaw adapting his cartooning to capture new varieties of confusion, alienation, and more. In New Realities, critic Greg Hunter (The Comics Journal) follows the through-line across this adventurous body of work.

Greg Hunter is a writer based in Minneapolis, Minnesota. He edits graphic novels for young readers and has contributed comics criticism to The Comics Journal, The Rumpus, and other publications.

Dash Shaw lives in Richmond, VA. He was a 2010 Sundance Labs fellow and a 2014–2015 Cullman Center fellow at the New York Public Library. A cartoonist, animator, and illustrator, he was born in Los Angeles and attended the School of Visual Arts. He is the author of Discipline (2021), Bottomless Belly Button, Body World, and many other comics and graphic novels. He is also the director of two animated films, My Entire High School Sinking into the Sea and the upcoming Crypto Zoo.